Initially, the Laboratory was called the Department of Genetics, Cytology and Embryology and consisted of three researchers: candidate of biological sciences G.P. Butova (who worked as the head of the department from 1971 to 1992), T. M. Tabatskaya and L.L. Skrobova. This period laid the foundation for future research. The Department focused its work on: 1) clonal micropropagation in order to obtain planting material of fast-growing and economically valuable forms; 2) preservation of valuable genetic material (ex situ conservation) by creating a collection of tree species; 3) expansion of genetic diversity and creation of new breeding material using in vitro cell and tissue selection, polyploidy, and genetic engineering.

Also, the team of the Institute’s researchers developed the long-term in vitro storage method with the use of hormone-free nutrient solutions for valuable deciduous tree species. 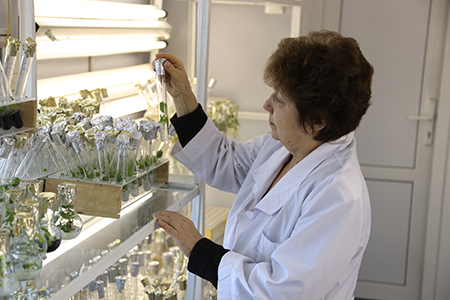 A key result of the long-term work has been the establishment of more than 2 hectares of experimental forest plantations of silver birch, Karelian birch, white poplar, gray poplar, aspen hybrids and clones. The plantations were created with the use of biotechnology methods, experimental mutagenesis and polyploidy. Also the team created an in vitro collection of clones, which contained a large genetic diversity. There are no other plantations of this age in Russia created with the use of in vitro technology.

In 2013, due to the new legal status of the Institute, the Department changed its name to the Laboratory of Biotechnology.

It is currently headed by Olga Sergeevna Mashkina. Under the leadership of Olga Sergeevna, the Laboratory has developed a new method for obtaining diploid pollen from trees, by which a number of fast-growing triploid poplar hybrids have been produced. Also the Laboratory has developed a number of methods for clonal micropropagation of deciduous tree plants. These methods are introduced into practice through the cultivation of planting material of valuable birch, poplar, and aspen genotypes and the establishment of experimental forest plantations. 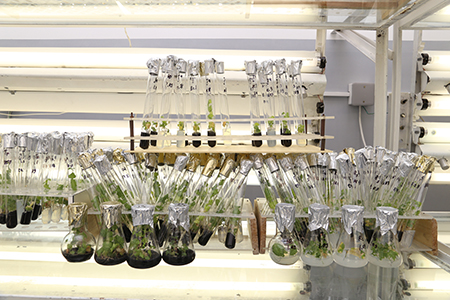 Under the guidance of Olga Sergeevna the Laboratory staff has created the long-term (more than 27 years) in vitro storage collection of deciduous woody plants that preserves valuable genotypes and enables plant breeders to grow elite quality planting material. This is one of the first forest tree species collections of this type in Russia. It currently contains 70 clones of deciduous trees (21 species, 3 genera, 2 families). The collection includes highly productive, resistant, and decorative hybrids, varieties and polyploids of birch, poplar, aspen and willow, obtained by either natural or artificial selection. The duration of in vitro storage now ranges from 1 to 28 years. Most of the preserved plants do not respond well to vegetative reproduction methods (traditional stem cuttings), and some of them are already not available in nature. 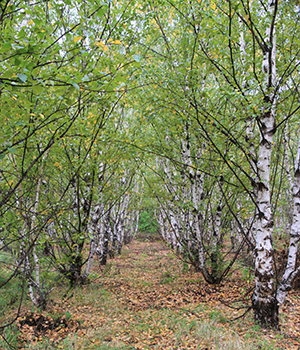